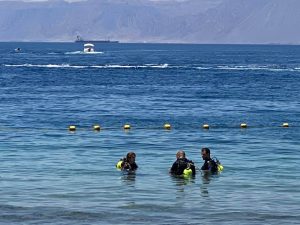 From the hotel, it took us just four minutes to get to Yamnaya. This public beach has free parking where there is no problem in leaving the car. The beach itself is nothing special, in fact, it was a bit dirty from people’s garbage. When we got to the sand we felt a bit watched, we were the only foreigners and I suppose we caught their attention.

Anyway, the people were friendly. For example, at a time when I was left alone, a group of girls came up to me and gave me a flower. We left the towels on the beach, in an area where there were fewer people, and we went into the sea. The water temperature was very pleasant, however, it has a reputation for never falling below 20 degrees. And, almost from the first step, the coral begins. If you have ever scuba dived through areas of coral, you will know that its surface is very sharp and the cuts heal very slowly, therefore, I would say that it is highly recommended to wear some booties to protect your feet at the entrance. At least in the area through which we entered. We have had them for years and we have used them a lot, much more than we thought.

You don’t have to walk too long to start scuba diving. Just a few steps away there is enough depth to lie down and enjoy the marine richness of the Red Sea. Different types of corals, sponges, clownfish, amoebas, parrotfish, pufferfish, angelfish, lionfish, butterflyfish, and thousands of small colorful fish are what we could see during our dive near the Japanese Garden. The visibility was perfect and the calm of the sea allowed us to enjoy a beautiful experience.

We were floating in the sea fascinated for almost two hours! There were areas where you were surrounded by hundreds of small fish. In others you found small schools of larger fish or solitary pufferfish. But if there was a fish that was everywhere, it was the Red Sea clownfish (or Nemos, as the smallest of the house know them). Maybe there weren’t that many, but they made themselves known as they are very territorial. Although they are tiny (about 10 centimeters) when you passed near their anemone they would come out to defend it,
swimming towards us quickly in a threatening way. Even when we brought the GoPro closer than necessary to take a photo, they even hit it.

We left the sea wrinkled as you pass after two hours without stopping and very hungry. In the car we had some food that we had bought the previous days, so we ate and went to visit the diving center where we had two dives reserved for the next day. The Camel Dive Center is located on First Bay Beach. We wanted to visit them to schedule the next day’s dives and see how to get there.

The staff is very friendly and, since we were there, we asked them where we could do some more diving before we went to dinner. They recommended us to go to the beach that is right in front but we could not enjoy the reef since in the last minutes the wind and waves had risen and the seabed was very rough.